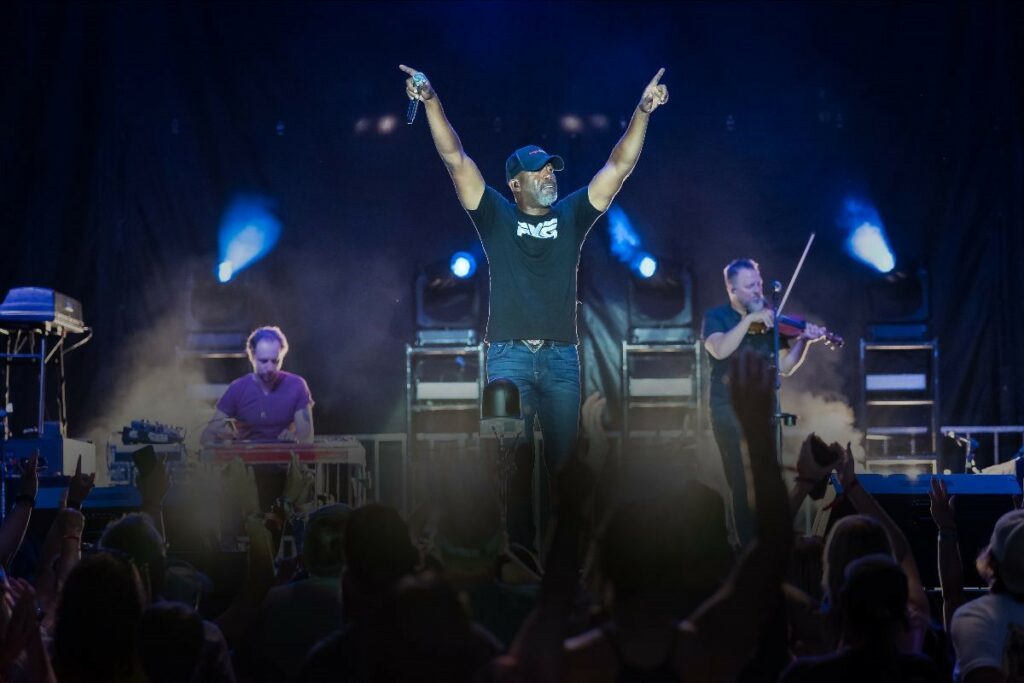 Platinum-certified country superstar Darius Rucker is  returning to Las Vegas, alongside special guest Lindsay Ell, for a special performance at the Sandbar Stage at Red Rock Resort on Sunday, Oct. 2, 2022 at 8 p.m. Located poolside at Red Rock Resort, the Sandbar poolside stage is the perfect destination for a concert experience under the stars. Tickets start at $80 plus taxes and fees and go on sale Friday, June 10, 2022 at 10 a.m.

Darius Rucker first achieved multi-Platinum status in the music industry as lead singer and rhythm guitarist of the GRAMMY Award-winning band Hootie & the Blowfish, who have sold more than 25 million albums worldwide including their Diamond-certified debut Cracked Rear View, which remains among the Top 10 best-selling studio albums of all time. Since releasing his first Country album in 2008, Rucker has earned a whole new legion of fans with four No. 1 albums on the Billboard Country chart, including RIAA Platinum-certified Learn to Live and True Believers, plus 10 No. 1 singles at Country radio and 11 Gold, Platinum or multi-Platinum certified hits. Rucker was inducted as a Grand Ole Opry member in 2012 and in 2014 he won his third career GRAMMY Award for Best Solo Country Performance with his 9x Platinum version of Old Crow Medicine Show’s “Wagon Wheel,” one of the top five best-selling Country songs of all time. He co-hosted the 54th annual CMA Awards in 2020 and topped the charts at Country radio once again with “Beers And Sunshine” in 2021. Follow up single “My Masterpiece” is available everywhere now as Rucker puts the finishing touches on a forthcoming album.

Lindsay Ell has shared the stage with some of the biggest acts in the world, touring with Keith Urban, Brad Paisley, and Sugarland. She has made multiple appearances on the CMA Awards stage, including playing with Carrie Underwood and performing with distinguished country group, Little Big Town, alongside other powerhouse female artists in one the biggest moments of the 2019 CMA Awards where she was also nominated for Musical Event of the Year. Ell’s nominations do not stop there, she is a 2x 2020 ACM nominee for New Female Artist of the Year and Music Event of the Year. Ell scored her first No. 1 with “What Happens in a Small Town,” her duet with Brantley Gilbert – another milestone moment making her the first Canadian artist to hit No. 1 in the US since Emerson Drive’s “Moments” in 2007, and the first Canadian woman to reach the top of the charts since Terri Clark with “I Just Wanna Be Mad” in 2003. Her new album, heart theory, maintains a sonic depth and auditory aura while still conveying the emotional rawness and storytelling that highlights Ell’s growth since her debut album on Stoney Creek Records, The Project, which debuted at No. 1 on the Country Album Sales Chart and was named Billboard’s “Best Country Album of 2017.”

Tickets for Darius Rucker and special guest Lindsay Ell are $80 and $100 plus taxes and fees for standing room only. All tickets go on sale Friday, June 10, 2022 at 10 a.m. Tickets can be purchased at any Station Casinos Reward Center or online by logging onto stationcasinoslive.com or ticketmaster.com. Guests under 18 years must be accompanied by an adult.