Alimkhanuly-Dignum and Herring-Jamaine Ortiz lightweight co-feature will be televised live on ESPN, ESPN Deportes and ESPN+ 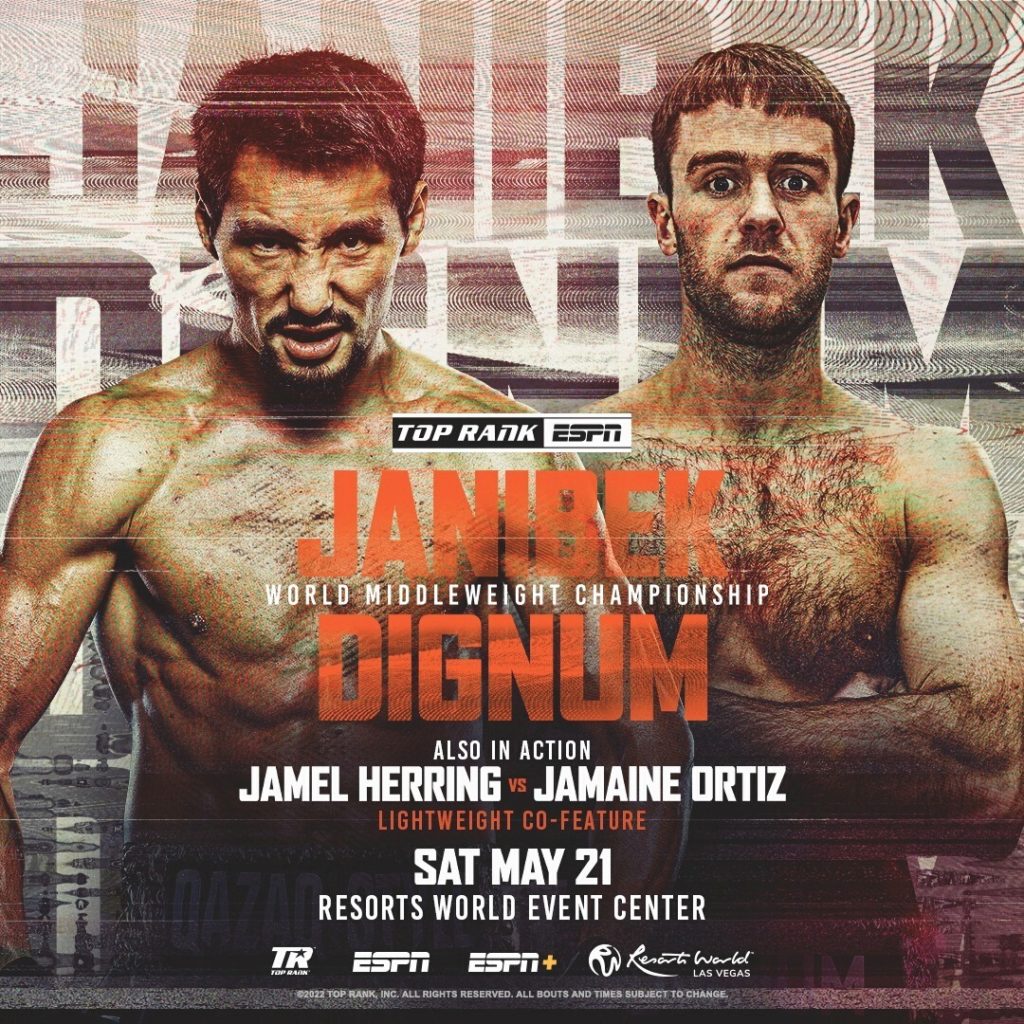 Middleweight contender Janibek “Qazaq Style” Alimkhanuly has been anxiously waiting for the main event spotlight, and on Saturday, May 21, he’ll hope to seize it. Alimkhanuly will face undefeated Englishman Danny Dignum in a 12-round showdown for the vacant WBO Interim middleweight world title at Resorts World Event Center at Resorts World Las Vegas.

Alimkhanuly-Dignum, and Herring-Ortiz will air live on ESPN, ESPN Deportes, and ESPN+.

“Janibek is a special talent, one of the very best to come from Eastern Europe in recent years,” said Top Rank chairman Bob Arum. “He’s getting the platform he deserves — a Las Vegas main event on ESPN — and I expect him to look sensational against a tough Englishman like Danny Dignum. Janibek has everything it takes to reign as middleweight world champion for a very long time.”

Alimkhanuly (11-0, 7 KOs) is a 2016 Olympian who has been on the fast track to a world title shot ever since knocking out 50-fight veteran Milton Nuñez in his pro debut. The Kazakh southpaw then racked up eight additional wins before scoring eighth-round stoppages over former world champions Rob Brant and Hassan N’Dam. Despite only 11 fights, Alimkhanuly has become an actively avoided fighter within his division, as several recognizable names at 160 pounds chose other options when opportunity knocked. With this shot at the interim title, he’ll finally get his chance on the main event stage.

Alimkhanuly said, “Demetrius Andrade and Jaime Munguia avoided fighting me, so I give Danny Dignum a lot of credit for stepping up to the plate. I will show the entire world true ‘Qazaq Style’ on May 21, and I will leave the ring as the WBO Interim middleweight champion. While the division’s top names are avoiding me, they won’t be able to run forever. I can’t wait to put on a spectacular showing at Resorts World Las Vegas.”

Dignum (14-0-1, 8 KOs) spent the better part of his amateur career at light heavyweight. In fact, the Essex, England, native had never made the 160-pound limit until November 2019, when he scored a fifth-round TKO over Conrad Cummings to snatch the WBO European crown. Dignum has made three defenses of his regional title, one of which ended in a split draw against Andrey Sirotkin. In February, he knocked down Grant Dennis three times en route to a sixth-round stoppage victory. Dignum will enter the ring with a height and size advantage in this all-southpaw battle.

Dignum said, “I am absolutely buzzing to be fighting Janibek for the WBO Interim middleweight world title. It’s a dream come true to be headlining a show in Las Vegas. All the sacrifice over the years has been worth it to get to this point. I’m very confident in my ability and will be coming to Resorts World to win that title.”

Herring (23-3, 11 KOs), a U.S. Marine Corps veteran and 2012 U.S. Olympian, began his pro career with a somewhat difficult run at 135 pounds. However, after signing with Top Rank and dropping down to junior lightweight, he revitalized his career with an impressive knockout over Juan Pablo Sanchez on the undercard of Jorge Linares-Vasiliy Lomachenko. Herring only needed two additional fights before upsetting Masayuki Ito for the WBO 130-pound crown. Herring made three tough defenses against Lamont Roach Jr., Jonathan Oquendo and Carl Frampton before losing his belt to Shakur Stevenson in October 2021. With this championship experience under his belt, Herring is ready to give it another go at 135 pounds.

Herring said, “I’m happy to be back, starting the new year with a fresh start. A lot has changed since I was last in the ring. I am working with a new trainer, Manny Robles, and returning to the lightweight division for this upcoming fight. I’m optimistic that a victory here will place me back in the title picture at either lightweight or junior lightweight.”

Ortiz (15-0-1, 8 KOs) is a quick-handed boxer whose only blemish is a majority draw against then-undefeated prospect Joseph Adorno. The 25-year-old demonstrated speed and volume punching in that fight, qualities that helped him obtain a unanimous decision win over Nahir Albright back in February to capture the NABF crown. This will be a considerable step up in opposition for Ortiz, who will have his second shot at fighting on a Top Rank on ESPN card.

Ortiz said, “Jamel Herring is a tremendous fighter with an impeccable resume, and I have all the respect in the world for what he’s accomplished, but on May 21, he’s stepping into my ring in my weight class, and I will show him – and the entire world – why I’m the future at 135 pounds. What you saw in February against Nahir Albright is simply a preview of what’s to come. We’ve only scratched the surface. I’m looking forward to adding more titles to my own resume as I climb the ladder in 2022.”

Genting Group comprises Genting Berhad (KLSE: GENTING), the holding company, and its listed companies Genting Malaysia Berhad (KLSE: GENM), Genting Plantations Berhad (KLSE: GENP) and Genting Singapore Limited (SGX: G13). Genting Group is involved in leisure and hospitality, power generation, oil and gas, property development, life sciences and biotechnology activities, with operations spanning across the globe, including in Malaysia, Singapore, Indonesia, India, China, the United States of America, Bahamas and the United Kingdom. Genting Group is a leader in the global gaming and hospitality industry. Founded in 1965, Genting Group has more than 50 years of experience in developing and operating destination resorts in the Americas, Malaysia, Singapore, the United Kingdom and the Bahamas, offering an unparalleled resort experience and iconic entertainment attractions to over 50 million visitors a year. For more information, visit www.genting.com.