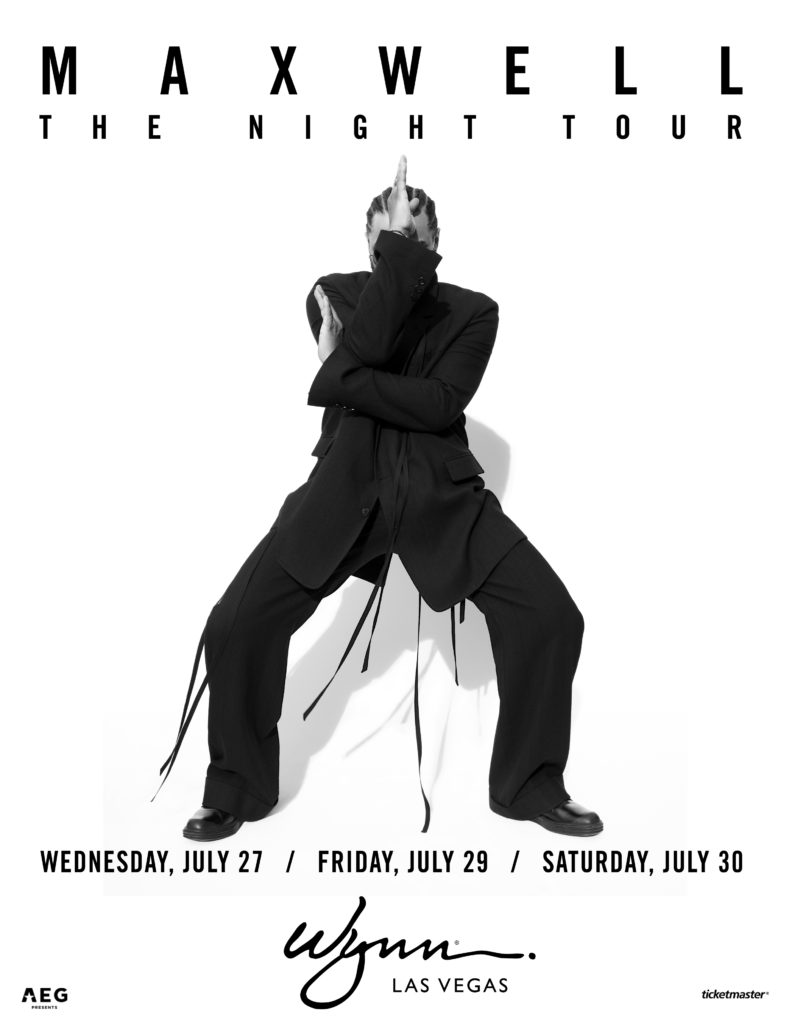 Part of His Expansive 2022 NIGHT Tour

Tickets for all three shows will be available for purchase
on Friday, April 8, 2022 at 10AM PT

This summer, Encore Theater at Wynn Las Vegas will welcome three-time GRAMMY® Award-winning and multi-platinum artist Maxwell for a three-night engagement as part of his The Night Tour. Fans can catch Maxwell’s performances on Wednesday, July 27, 2022, Friday, July 29, 2022 and Saturday, July 30, 2022, all at 8 p.m. Tickets will go on sale to the public on Friday, April 8, 2022 at 10 a.m. PDT.

●     Point of Purchase: musze.com and TicketMaster.com

This announcement follows on the heels of Maxwell capturing the No. 1 slot on Billboard’s Adult R&B Airplay Chart for his latest single “OFF.” The placement marks the R&B star’s eighth No. 1 Billboard Adult R&B Airplay single and 15th top ten hit throughout his illustrious career, further heightening anticipation for the arrival of his forthcoming album, blacksummers’NIGHT.

The 2009 BLACKsummers’night album bowed at No. 1 on the Billboard Top 200, earned a platinum certification, and garnered GRAMMY® Awards in the categories of “Best R&B Album” and “Best Male R&B Vocal Performance” for “Pretty Wings.” In 2016, the sequel blackSUMMERS’night captured the No. 3 spot on the Top 200, marking Maxwell’s fourth Top 10 debut overall. Additionally, “Lake By The Ocean” received “Best R&B Song” at the 2017 GRAMMY® Awards.

As Maxwell reaches a halfway point on his current run of spring dates on The Night Tour, he continues to receive an outpouring of support from fans and critics alike, with sold out venues across several major cities.

For tickets or more information on his upcoming Las Vegas performances, visit WynnLasVegas.com.

The Encore Theater at Wynn Las Vegas is a world-class entertainment venue that is home to legendary resident headliners, comedic icons and one-of-a-kind concert events. At 1,480 seats, Encore Theater provides an intimate opportunity for guests to experience top talent in an incomparable setting. Encore Theater’s roster of impressive performers is a reflection of the successful partnership between Wynn Las Vegas and AEG Presents Las Vegas.

In 2021, Encore Theater was named one of Billboard’s top five grossing venues in the world under 5,000 capacity, rising to No. 4 from its prior No. 10 spot in 2019, and remained the No. 1 top grossing theater under 3,000 capacity in the world. The theater has hosted performances by music icons like Lionel Richie, Robbie Williams, Brad Paisley and Bryan Adams as well as all-star comedic acts like Sebastian Maniscalco, Jo Koy, Ali Wong and Jim Gaffigan among others.

Combining the power of the live event with a focus on true artist development, AEG Presents is a world leader in the music and entertainment industries. Operating across four continents, the company has an unparalleled commitment to artistry, creativity, and community. Its tentpole festivals and multi-day music events — which include the iconic Coachella Valley Music & Arts Festival and the legendary New Orleans Jazz & Heritage Festival alongside British Summer Time at Hyde Park, Stagecoach, Hangout Festival, Electric Forest, and Firefly — continue to set the bar for the live music experience. AEG Presents promotes global tours for artists such as The Rolling Stones, Ed Sheeran, Elton John, Taylor Swift, Celine Dion, Justin Bieber, Kenny Chesney, Paul McCartney, and Katy Perry, in addition to — through its network of clubs, theatres, arenas, stadiums and renowned partner brands such as Goldenvoice, Messina Touring Group, Concerts West, The Bowery Presents, PromoWest Productions, Marshall Arts, Madison House Presents, and Zero Mile Presents — creating and developing an unmatched infrastructure for artist development and audience reach. More information can be found at www.aegpresents.com.

Maxwell has artfully managed to transfix music lovers for more than two decades, releasing five studio albums, all in his own time and all duly anointed as classics. The soul singer redefined soul music in April of 1996 when he released his critically-acclaimed debut on Columbia, “Maxwell’s Urban Hang Suite.” It earned Grammy nominations, double platinum status and RIAA gold for the single, “Ascension (Don’t Ever Wonder).” The platinum albums “Embrya” (1998) and “Now” (2001) followed. After eight years, 2009’s “BLACKsummers’night” debuted at No. 1 on the Billboard 200 and won two Grammys, including Best R&B Album. To date, Maxwell has achieved 4 platinum album certifications from the RIAA. His last album “blackSUMMERS’night,” the second installment of his musical trilogy, earned Maxwell his third Grammy (Best R&B Song for “Lake By the Ocean”) an NAACP Image Award (Outstanding Male Artist), and a Soul Train Award (Best R&B/Soul Male Artist). Recently honored with the “Legend” Award at the 2021 Soul Train Awards, Maxwell’s upcoming “blacksummers’NIGHT” will cap off the journey he first embarked upon over a decade ago as one of the most anticipated R&B events of 2022.