Under the twinkling lights of its iconic dome, the Plaza Hotel & Casino unveiled the details of four large-scale projects that will transform and reimagine its historic Main Street façade, including its porte-cochère, into a one-of-a-kind destination for cocktails, gaming, and dining.

“The Plaza is proud to call 1 Main Street home,” said Jonathan Jossel, CEO of the Plaza Hotel & Casino. “Main Street is where Las Vegas got its start, and over the last decade, the Plaza has continued to improve and create new experiences at this historic site. Like our neighbors and city leaders, we have been committed to revitalizing downtown Las Vegas into a destination known for great art, dining, culture, hospitality, and entertainment. Today, we unveil plans to further these efforts and transform Main Street into an unforgettable and must-visit place in Las Vegas for food, drinks, and gaming.”

Noting that the Sand Dollar Downtown opened last month at the Plaza with its own entrance on Main Street, Jossel detailed the four new projects: the animated Carousel Bar under the Plaza’s iconic dome, downtown’s first smoke-free, social media friendly gaming area, a rooftop patio at Oscar’s steakhouse, and the addition of the popular, Vegas-based Pinkbox Doughnuts.

He thanked city of Las Vegas Mayor Carolyn Goodman and her husband, former Las Vegas Mayor and steakhouse namesake, Oscar Goodman for their continued support of the Plaza and downtown. Jossel added that the Plaza’s evolution and improvements, including these four projects, wouldn’t be possible without the vision of the property’s owner, Poju Zabludowicz, chairman and CEO of Tamares Group.

The centerpiece of the Plaza’s Main Street reimagination project will transform its porte-cochère under the iconic dome into the Carousel Bar that will offer outdoor bar experience unlike any other. Guests will enjoy handmade cocktails, beer, and wine among life-sized Vegas-themed elements, including carousel horses moving up and down, spinning martini glasses, an oversized deck of cards, and a rotating ribbon of lights above the bar. The Carousel Bar’s design also preserves the dome’s iconic vintage Vegas lights that have been featured in many movies and shows over the years. The 2,500 sq. ft. outdoor venue will include an outdoor cooling system and seating for nearly 100 guests in booths, at the bar, and along its outer rail that will overlook Main Street at the western entrance to the Fremont Street Experience.

Adjacent to Carousel Bar will be downtown’s first smoke-free and social media friendly gaming space with the industry’s latest and most advanced slot machines, including the popular Brian Christopher Slots area that debuted last year at the Plaza. A first of its kind collaboration, Brian Christopher Slots at the Plaza became an instant success, establishing the Plaza as the ultimate destination for slot machine enthusiasts looking to play the games that they have watched on the social media influencer’s channels. The nearly 2,500 sq. ft. gaming space will be for guests 21 and older and styled like the Plaza’s prior Studio 71 photo space with fun backdrops for selfies, group shots and Instagrammable moments. It will also better accommodate social media posting of videos because the Plaza will be able to control the music in the space by lowering the volume, turning it off completely, or playing only copyright friendly songs that can be posted on social platforms. 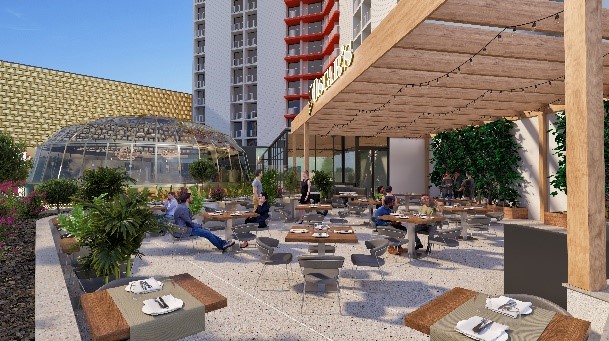 Oscar’s patio will be created on the rooftop deck above the new gaming space and be accessible via the restaurant’s existing lounge. Offering the award-winning restaurant’s full dinner menu in addition to its extensive wine and cocktail lists, Oscar’s patio will be the first al fresco space for fine dining in downtown. Able to accommodate approximately 225 people, the patio at Oscar’s will be a great new location for cocktail receptions with amazing views of downtown, including Carousel Bar and the lights and action on Fremont and Main Streets. 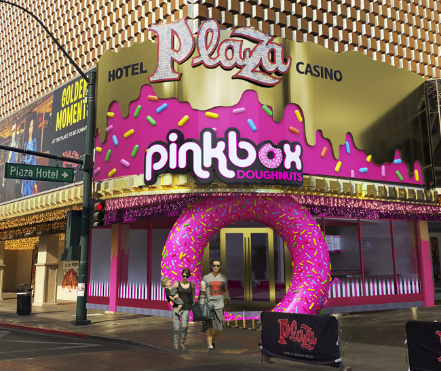 Through an oversized, 3D doughnut with sprinkles entrance on Main Street, Pinkbox Doughnuts will satisfy guests’ cravings for its delicious and fun creations. From a 16-foot-long glass doughnut display case, Pinkbox will sell its full line of over 70 different flavors of doughnuts, from classics and signature creations to Doughcros® and vegan, including delicious favorites like the Plain Face Doughcro®, Blueberry Face Doughcro®, Vegas Cream, and the beloved PINKY® doughnut that is the face of Pinkbox Doughnuts®, a vanilla cake topped with white buttercream and pink icing shaped as a Pooh®. Pinkbox will also launch an exclusive menu of spiked (alcoholic) doughnut milkshakes at the Plaza location. The interior décor of the 1,200 sq. ft. store will mirror Pinkbox’s most recent locations across the valley with its pink floor stripes and 3D sprinkles, coffee spill and signature pinks drips on the walls.

Construction on the four projects will begin later this month. SR Construction is the general contractor. The projects are expected to be complete by the end of the year. The Plaza and Oscar’s will remain open during construction.

About the Plaza Hotel & Casino