UPDATED PERFORMANCE SCHEDULE FOR THE AUSTRALIAN BEE GEES AND THUNDER FROM DOWN UNDER
AT EXCALIBUR HOTEL & CASINO
Effective immediately, Excalibur Hotel & Casino

Australia’s Thunder From Down Under
Australia’s Thunder From Down Under – the sizzling adult male revue that has been seen on national TV shows including “Project Runway,” “Drop Dead Diva” and “Ellen” – is heating up the castle with 12 performances weekly. The troupe of highly acclaimed, award-winning Australian dancers provides a sensual and celebratory adventure every night. Guests must be 18 years of age or older.
Dates: Nightly
Times: Monday – Wednesday:  9 p.m.
Thursday, Saturday and Sunday:  9 p.m. and 11 p.m.
Friday:  7 p.m., 9 p.m. and 11 p.m.
Prices: $40.95, $50.95 and $60.95 (not including applicable service charges and taxes)
Buy: Tickets can be purchased at the Excalibur box office, online at excalibur.com

Reminder: See her Perform “In Your Arms” on Ellen Tomorrow, November 15th! Matt Nathanson has a lot of buzz surrounding him and he will be performing with Maroon 5 at the Pearl at the Palms on September 17, 2011.

Matt Nathanson is one of the most dynamic performers and premier songwriters on the music scene today. In 2007, his release Some Mad Hope produced the smash hit single ‘Come On Get Higher’ which has sold over 2 million copies to date and subsequent hit singles ‘Car Crash,’ ‘Falling Apart,’ and ‘All We Are.’ The success of Some Mad Hope earned Nathanson the coveted spot as a VH1 ‘You Oughta Know’ artist and he has graced the stages of such national television shows as David Letterman, Ellen, Conan O’Brien, Jimmy Kimmel and Craig Ferguson. His songs have been featured in numerous film and television programs including Good Morning America, NCIS, Private Practice, American Idol, Vampire Diaries, American Pie and 90210. His legendary live shows have resulted in sold out tours across the U.S., Canada and Australia. Nathanson’s eighth studio recording, Modern Love, was released on June 21st.

Debut album “lovestrong.” Lands the #4 Spot on the Billboard 200 Week of Release!

Christina Perri will hit the road this Summer on her first ever headlining tour of the US in support of her debut album lovestrong. – out May 10th on Atlantic Records. Kicking off on July 16th in Las Vegas, NV with a show at The Cosmopolitan of Las Vegas, the tour includes a performance at this year’s Lollapalooza and ends at the Outside Lands Festival on August 13th in San Francisco, CA.

It has been quite an incredible few weeks for the LA based Philly native. Since the May 10th Atlantic Records release of her Top 5 debut album lovestrong., she’s performed live on ELLEN, The Today Show and Jimmy Kimmel Live, made appearances on MTV’s The Seven and VH1’s Morning Buzz, and her double platinum first single “Jar Of Hearts” was performed by Lea Michele on the “Prom Night” episode of Glee. To top that off, Christina’s second single “Arms” is moving up the Hot AC Chart and her video for the new single is already a staple on VH1’s Top 20 Countdown and is currently in Large rotation on the channel.

Check out what the press has been saying about her new tunes:

“…pairs the voracity of Florence & the Machine with the growling undertones of Adele’s voice.”
Billboard

“…we can’t get enough of her spunky, sing-a-long track, ‘Bang Bang Bang.’”
NYLON

Catch her live on her headlining tour of the US, confirmed tour dates below: 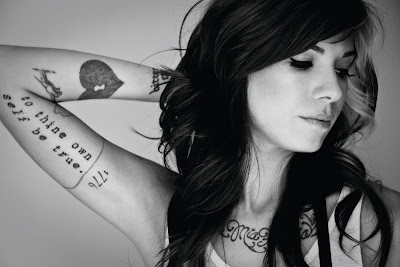 Christina Perri’s debut album lovestrong. has blasted into the #4 spot on Billboard’s Top 200 after an outstanding first week of sales. The album, which hit stores on May 10th (Atlantic Records), marks quite an accomplishment for Perri, who is only the second new artist this year to debut in the Top 5 with her first album.

The strong debut comes on the success of her hits “Jar of Hearts” (over 2 million singles) and “Arms.” The latter track has made fast work climbing Hot AC radio charts, with “Jar” still spinning strong at Top 40 stations over ten months after release. The “Arms” music video is already a staple on VH1’s Top 20 Countdown, moving to Large rotation this week.

Christina has been sweeping television this past week, performing on Ellen (5/13), The Today Show (5/17) and Jimmy Kimmel Live! (5/18), as well as appearances on MTV’s The Seven and VH1’s Morning Buzz.

In addition, “Jar of Hearts” received the Glee treatment on release date when Lea Michele’s striking rendition of the song aired during the “Prom Queen” episode last Tuesday. The Glee Cast version of the track sold 70,000 copies this week, while Perri’s original climbed back into iTunes Top 30, selling 73,000 downloads.

Perri just wrapped three weeks of dates with James Blunt and has announced news of her first-ever headlining tour that kicks off in Las Vegas on July 16th and keeps her on the road until mid-August. The trek also includes stops at this year’s Lollapalooza and Outside Lands festivals.