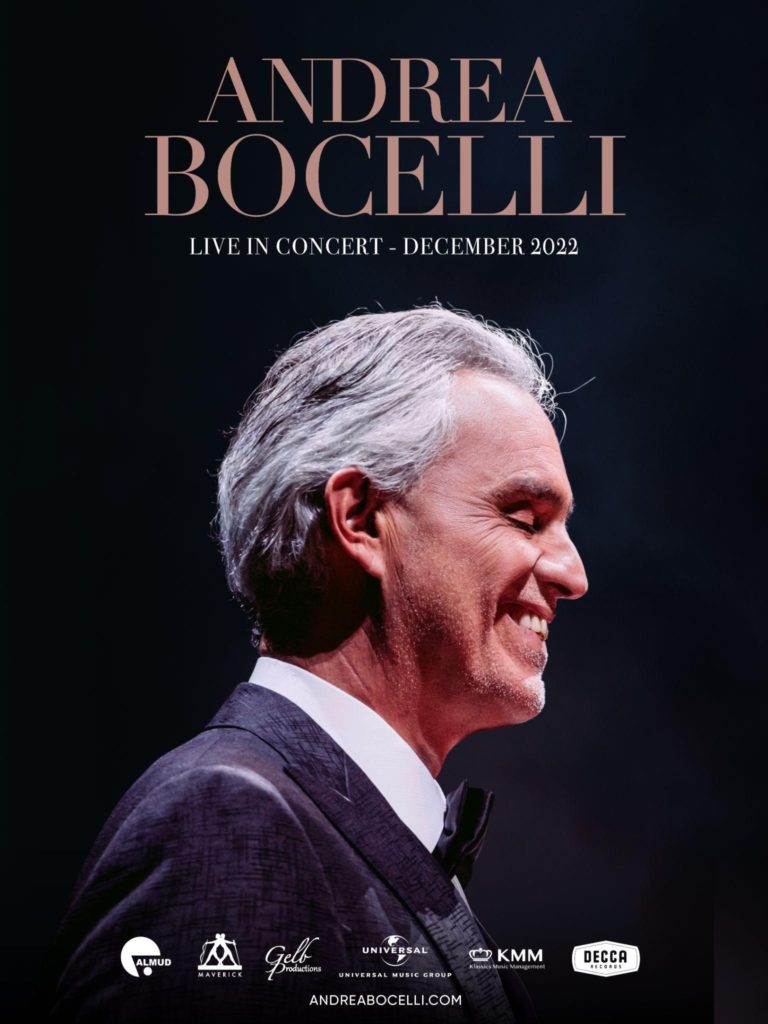 The tour also finds Bocelli performing for the first time ever in Bridgeport, CT, Savannah, GA, Indianapolis, IN with the Indianapolis Symphony Orchestra, and for the first time at the new venue UBS Arena in Long Island, NY. He also is set to return to the legendary Madison Square Garden in New York City on December 14.

Tickets for Bocelli’s December 2022 dates go on sale to the public Monday, April 11 at 10 a.m. PT. For all upcoming tour routing, please see dates listed below and visit www.andreabocelli.com for more info.

Andrea Bocelli In Concert will feature performances from Bocelli’s uplifting album Believe, a poignant and personal collection of songs, celebrating the power of music to soothe the soul, as well as a selection of arias, his beloved crossover hits, famed love songs, and music in honor of the Holiday Season.

Meanwhile, tickets for Bocelli’s upcoming 2022 summer and fall tour dates in North America and Europe are on sale now. Tickets are available at www.andreabocelli.com/tickets and https://www.gelbproductions.com/tour.

As one of the most recognizable voices in the industry, and revered by fans internationally, Andrea Bocelli has been entertaining audiences for over 20 years, counting nearly 90 million records sold worldwide. In addition to his sold-out arena-sized concert events and record-breaking live-streams, Bocelli has shared his talents at major events including the Olympic Games, the World Cup, and Global Citizen. He has earned a Golden Globe, seven Classical BRITs and seven World Music Awards, plus a star on the Hollywood Walk of Fame. His 2018 album, Si, reached No.1 on both the US and UK charts.

Stifel is a full-service, global investment firm with a distinguished history of providing securities brokerage, investment banking, trading, investment advisory, and related financial services to individual investors, institutions, corporations, and municipalities. Established in 1890 and headquartered in St. Louis, Missouri, Stifel is one of the nation’s leading Wealth Management and Investment Banking companies. With over 400 offices across the nation, and in Europe, Stifel is dedicated to providing superior services and products, the newest technological advances, and industry-leading client communication, plus the professional knowledge and exclusive research that help our clients pursue financial goals.