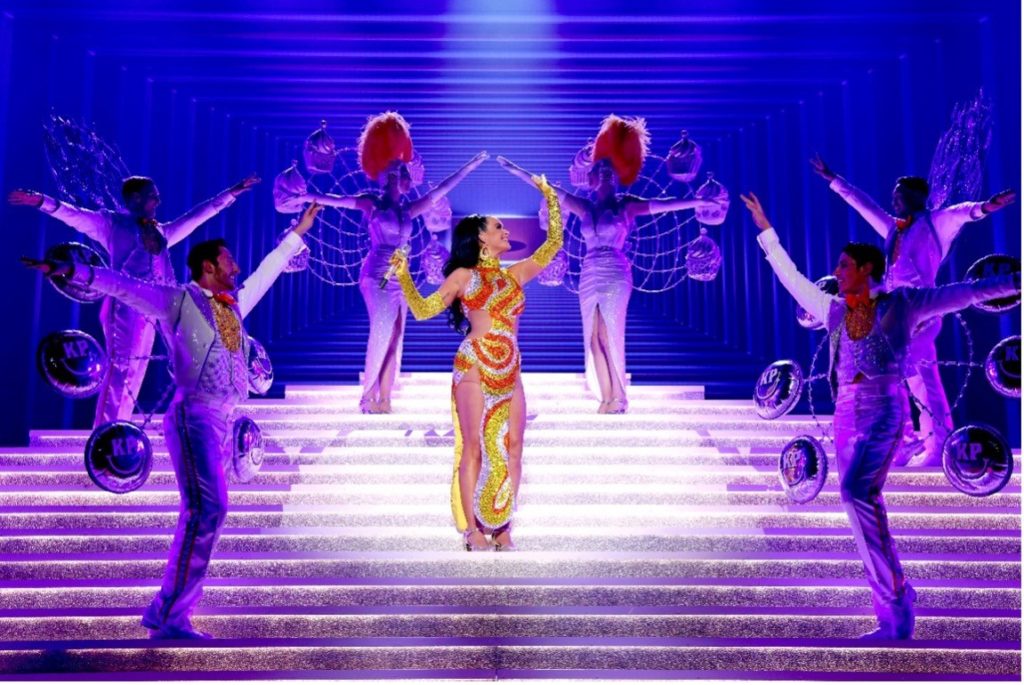 As rave reviews and demand continues for Katy Perry’s new Las Vegas residency, “Katy Perry: PLAY,” at the brand-new Resorts World Theatre, more show dates have been added from May 27 to June 11, 2022, including Memorial Day Weekend, and July 29 to August 13, 2022. Tickets for the 16 new shows will go on sale on Saturday, January 29, at 10 a.m. PST – the same day Katy returns to the “Saturday Night Live” stage for her fourth appearance as musical guest.

Since the premiere of “Katy Perry: PLAY” at Resorts World Las Vegas on December 29, 2021, the larger-than-life residency has been embraced by fans and media alike. Rolling Stone declared, “’PLAY’ time has begun in Las Vegas.” The show was hailed as a “… sensory explosion” by Billboard, “… the complete confection” by Vulture and “… quintessential Perry” by Elle.com. Vogue noted, “Katy Perry is still the queen of camp.”

Previously announced “Katy Perry: PLAY” show dates that are currently on sale include:

Tickets and VIP packages are available at rwlasvegas.com/entertainment/katy-perry and AXS.com/katyinvegas.

The opening night of “Katy Perry: PLAY” featured her first live performance of “When I’m Gone”(10:22PM/Astralwerks/Capitol Records), Katy’s collaboration with GRAMMY®-nominated producer/dance artist Alesso. Praised as “a spacey electro-pop dance track” by Rolling Stone, the track went straight to No. 1 on the U.S. Dance Shazam chart. It’s entered the top 10 of Billboard’s Hot Dance/Electronic Songs chart and the top five on iTunes in the U.S.

The official video for “When I’m Gone” premiered during halftime of the 2022 College Football Playoff National Championship, marking the only time that ESPN has ever dropped a global music video within a live broadcast across its networks. People said, “Katy Perry is delivering everything her fans have been asking for in her latest music video.”Paper Magazine praised the ”over-the-top, kitschy visuals” while Popsugar observed, “Katy Perry’s new musical era is here!”

Katy will return to “American Idol” for her fifth season, hosting with her co-judges. The February 27 season premiere kicks off the show’s 20th year.

Katy Perry has racked up a cumulative 50 billion streams alongside worldwide sales of over 48 million adjusted albums and 135 million tracks. She boasts an impressive 40M + monthly listeners on Spotify with over 20M followers on the platform. Her 2019 single, “Never Really Over,” off her latest album SMILE, is certified PLATINUM and was the biggest streaming launch of Katy’s musical career. 2020’s SMILE release has sold over 1.25 million adjusted albums, with nearly 2 Billion combined streams to date. Views of her 2013 video “Roar” and 2014 “Dark Horse” have recently surpassed three billion views – making Katy the first female artist to reach this milestone. Katy’s 2015 Super Bowl performance is the highest-rated in the event’s history. She is one of only five artists in history to have topped 100 million certified units with their digital singles – and the first-ever Capitol Records recording artist to join the elite RIAA 100 Million Certified Songs club.

Aside from being one of the best-selling musical artists of all time, Katy is an active advocate of many philanthropic causes. In 2013, Katy was appointed a UNICEF Goodwill Ambassador and has used her powerful voice to ensure every child’s right to health, education, equality, and protection. Katy has also been a champion for LGBTQ+ equality, and has received numerous awards for her work, including the Trevor Project’s Hero Award in 2012, the Human Rights Campaign’s National Equality Award in 2017, amfAR’s Award of Courage in 2018, and Variety’s Power of Women distinction in 2021.