Jimmy O. Yang to Debut at The Mirage Theatre
July 8 & 9 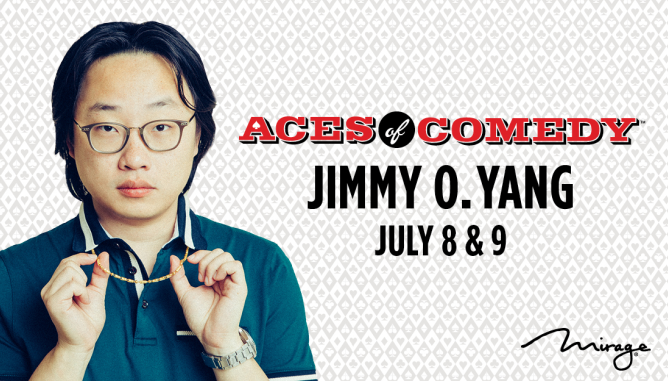 Actor, stand-up comedian and writer Jimmy O. Yang will make his Aces of Comedy debut at The Mirage Hotel & Casino July 8 – 9.  The shows will be performed at The Mirage Theatre with Yang scheduled to take the stage at 10 p.m.

Tickets, starting at $39.99 (not including applicable service charges or fees), go on sale to the public Friday, April 15 at 10 a.m. PT and can be purchased at mirage.com and ticketmaster.com. Members of MGM Rewards, MGM Resorts International’s reimagined loyalty rewards program, will receive access to a presale running Thursday, April 14 from 10 a.m. PT to 10 p.m. PT.

Jimmy O. Yang is best known for his starring role as Josh Lin in Netflix’s “Love Hard” and his portrayal of ‘Jian Yang’ on HBO’s Emmy-nominated series “Silicon Valley.” He also played the memorable Berard Tai in the hit movie “Crazy Rich Asians.” He is currently starring in the Netflix comedy “Space Force” opposite Steve Carell and John Malkovich. His first hour-long comedy special “Good Deal” is currently streaming on Amazon Prime and has since become some of the most viewed standup comedy clips on social media.

Born in Hong Kong, Yang moved to Los Angeles when he was thirteen where he eventually made his television debut on the CBS series “2 Broke Girls.” His first late-night stand-up appearance was on “The Arsenio Hall Show,” where he received a rare standing ovation. Yang also is the author of the book HOW TO AMERICAN, which is his personal memoir of growing up as a teenage foreigner in America.

Next, Yang is set to be in the Netflix comedy “Me Time” opposite Kevin Hart and Mark Wahlberg. Other film credits include “Patriot’s Day,” “Fantasy Island,” “Like A Boss,” “Life of The Party” and “The Opening Act.”