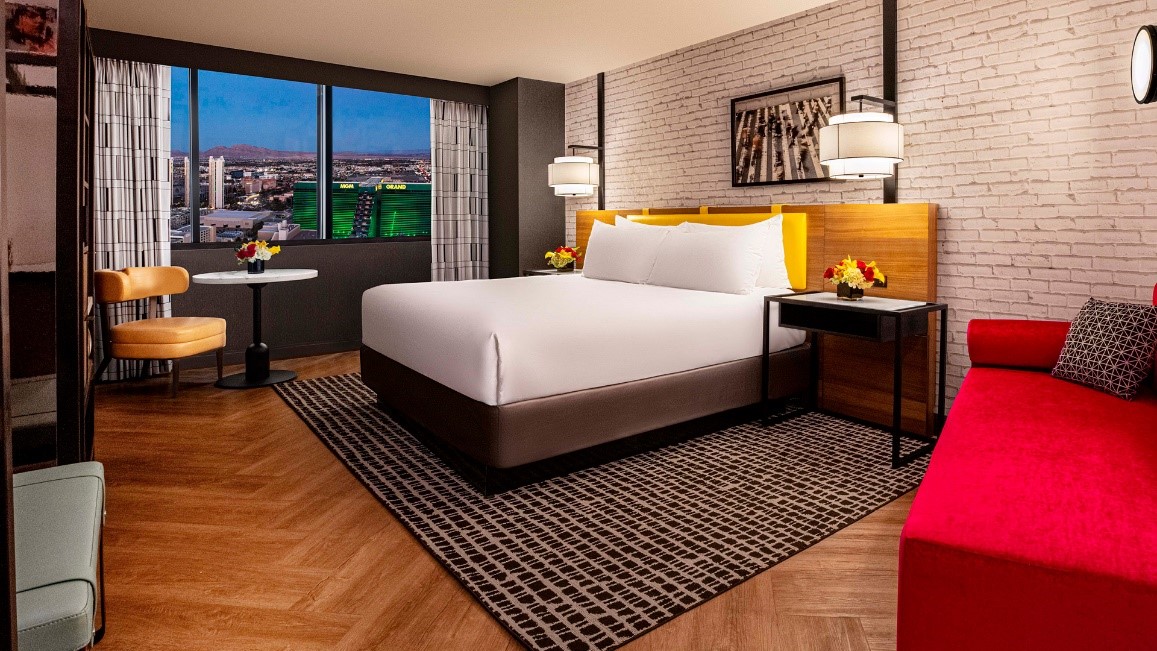 New York-New York launched a $63 million room remodel project this week of its 1,830 rooms and 155 of its suites. When completed in the summer of 2023, the accommodations will feature vibrant new designs and upgraded in-room amenities that will appeal to travelers from around the world.

Crafted by hospitality design firm HVS Design in partnership with MGM Resorts International Design Group, the design aesthetic draws inspiration from the energy and excitement of two of the world’s great cities — Las Vegas and New York City. The remodel features design details that harken to New York City, such as rooms with exposed faux brick walls and accent colors such as Big Apple Red and Taxicab Yellow. These elements subtly bring the ‘City that Never Sleeps’ to life in the Entertainment Capital of the World. Reflecting a thoughtful use of space, rooms will incorporate modern conveniences such as moveable work surfaces, readily available USB/USB-C power outlets and additional shelving and closet space.

“It’s an exciting time at New York-New York. We recently launched Cirque du Soleil’s Mad Apple show to tremendous feedback from our guests.” said Michael Neubecker, the resort’s President & COO. “To embark on a remodel of our rooms and suites is the next step in keeping the resort fresh and giving guests new reasons to visit. Whether coming for business or pleasure, guests will find our new rooms offer a stylish and modern respite as they enjoy the excitement of Las Vegas.”

Christine Shanahan, Principal at HVS Design, said, “As we envisioned our design for this project, we incorporated that New York City vibe and twisted it with bold colors and pops of energy to blend with Las Vegas, stressing functionality as a key factor. Guests will experience the feel of a loft apartment with convenient touchpoints and amenities designed to make them feel right at home.”

Completion of all guest rooms and Spa, Marquis and Players suites is scheduled for summer 2023 with the first collection of standard and premier rooms available for guest stays in late October 2022.

The room remodel is the next phase of a resort transformation that includes the recently launched “Mad Apple”; the refurbished and rebranded Big Apple Coaster with new trains for a smoother ride; and the revamped Big Apple Arcade with updated games and the latest RFID technology. More enhancements to the property will be announced in the coming months.

About New York-New York
Inspired by the famous energy and landmarks of the iconic original, New York-New York offers all the excitement of the hotel’s namesake, from the thrilling Roller Coaster to tantalizing restaurants including Gallagher’s Steakhouse and Nine Fine Irishmen, an authentic pub offering the best of Irish drink, food and music.  In May 2022, New York-New York welcomed Mad Apple, a delicious new, wickedly fun Cirque du Soleil cocktail of music, comedy, magic and mayhem putting NYC nightlife under the Las Vegas lights. Located adjacent to The Park, New York-New York is home to a selection of Strip-front dining and retail destinations including a two-story flagship Hershey’s Chocolate World, Shake Shack and Tom’s Urban. New York-New York is operated by MGM Resorts International (NYSE: MGM). For more information and reservations, visit newyorknewyork.com, call toll free at (866) 815-4365, or find us on Instagram, Facebook and Twitter.