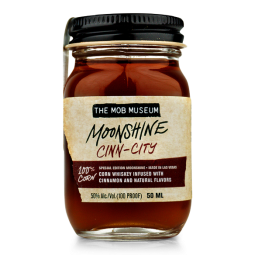 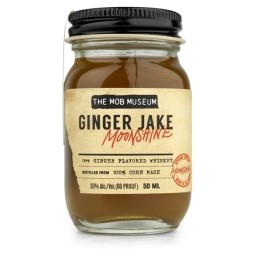 L to R: The Underground Speakeasy and Distillery’s
Cinn-City Moonshine and Ginger Jake Moonshine.
(Photos Courtesy of The Mob Museum)

The Mob Museum, the National Museum of Organized Crime and Law Enforcement, announces its house-distilled moonshine received two prestigious awards in the 2022 Central Coast Wine and Spirits Competition as part of this year’s California Mid-State Fair.

In the category of invitational spirits made outside of California, The Museum earned Double Gold for its 100 proof Cinn-City Moonshine naturally flavored with cinnamon and brown sugar and Silver for its Ginger Jake Moonshine featuring citrus notes and a gingery snap. Both varieties are crafted in-house in The Underground’s custom-made, copper-pot still.

“The team worked hard to create these two distinctive moonshine recipes so we are thrilled to receive such notable awards,” said Ashley Miller, vice president of sales, marketing and communications for The Mob Museum. “With so many outstanding spirits at the California Mid-State Fair, it is an honor to receive these two designations.”

The Museum has also previously received acclaim for its premium spirits, being awarded a Double Gold medal for its house-distilled signature moonshine in 2019 by The Fifty Best and winning first place in the category of Best Moonshine at the 2020 International Whiskey Competition.

ABOUT THE CALIFORNIA MID-STATE FAIR
The Fair opened in 1946 and was first known as the San Luis Obispo County Fair. The California Mid-State Fair is held annually and runs for 12 days. The Fair has hosted some of the biggest names in the music industry. Artists such as Aerosmith, Garth Brooks, Tom Petty, George Strait, Journey, Miranda Lambert, Rod Stewart, Justin Bieber, Jason Aldean, Cardi B, Blake Shelton, Luke Bryan, Carrie Underwood and Kenny Chesney have all performed on the Main Grandstand Arena stage. Facilities are located at 2198 Riverside Avenue in Paso Robles, California.

ABOUT THE UNDERGROUND
|The Underground is an immersive Prohibition history experiential exhibition, featuring a distillery, speakeasy and private VIP room located in the basement of The Mob Museum. Its custom-made, copper-pot still, dubbed “Virginia Still” after mobster Benjamin “Bugsy” Siegel’s notorious girlfriend Virginia Hill, has a capacity of 60 gallons and can serve up to 250 750-mL jars of moonshine per week. The Underground also brews and serves craft beer onsite. Artifacts from the 1920s and 1930s on display tell the intriguing story of the Prohibition era, which not only saw a proliferation of bootlegged booze and the meteoric growth of organized crime outfits, but also had a profound, lasting impact on society and culture. Complimentary entrance to The Underground is granted at the secret side entrance to visitors who know the correct password, which is published daily on Instagram Stories @MobMuseum_Underground.