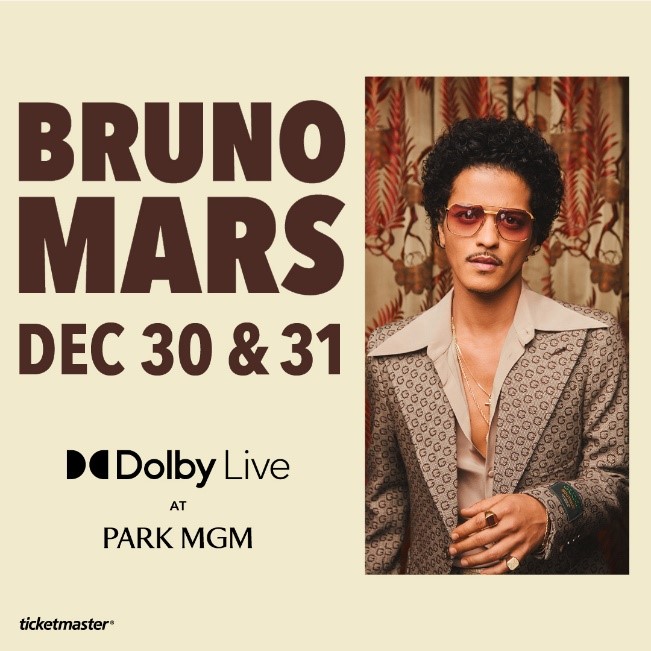 Tickets start at $140, plus applicable service charges, and go on sale to the general public Friday, Sept. 23 at 10 a.m. PT. Tickets can be purchased online at ticketmaster.com.

Mars’ 64th Annual GRAMMY win for Record of the Year, made him only the second artist in GRAMMY history to win the category three times, following Simon and Garfunkel.

Mars’ critically acclaimed “Leave The Door Open” climbed its’ way from No. 3 to No. 1 on the Billboard Hot 100, making it his eighth No. 1. He became one of the 18 artists in Hot 100 history to ever do so. 24K Magic marked his highest first week sales debut, remaining in the Top 10 on the Billboard 200 for an impressive 44 consecutive weeks. The lead hit single “24K Magic” is certified five-times Platinum by the RIAA and the follow-up smash, “That’s What I Like” is certified ten-times platinum. “That’s What I Like” also climbed to No. 1 on the Billboard Hot 100, marking Mars’ seventh Hot 100 chart-topper and his first No. 1 on the Hot R&B Songs chart, where it remained at the top-spot for 19 consecutive weeks. His smash collab with Cardi B, “Finesse,” skyrocketed to #3 on the Billboard Hot 100. The track surged up the chart from its #35 debut and followed Michael Jackson’s “Black or White” as the second #35 to #3 jump in the Hot 100’s history. The remix also marked Mars’ fifteenth Hot 100 top 10 and fourteenth Hot 100 top 5.

Additionally, Mars became the first male and third act overall to have at least three top 5 Hot 100 hits from each of his first three albums, following only Mariah Carey and Beyoncé. Mars is also the first artist to have two songs spend 24 or more weeks in the Hot 100’s Top 5 (“That’s What I Like” and “Uptown Funk”). Honorably, Mars is one of the few artists to have written and produced all of his No. 1 hits and has had a No. 1 song on the Hot 100 from each of his first three studio albums.

With seven Hot 100 No. 1’s, Mars was ranked No. 1 among male artists with the most Hot 100 No. 1s for this decade, extending his lead over Justin Bieber, Drake, Eminem, and The Weeknd. Mars traveled the globe from 2017-2018 on a massive 24K Magic World Tour, which sold more than 1 million tickets in a single day. In 2015, Mars dominated music charts with the hit single “Uptown Funk,” which took home three GRAMMY Awards, including Record of the Year.