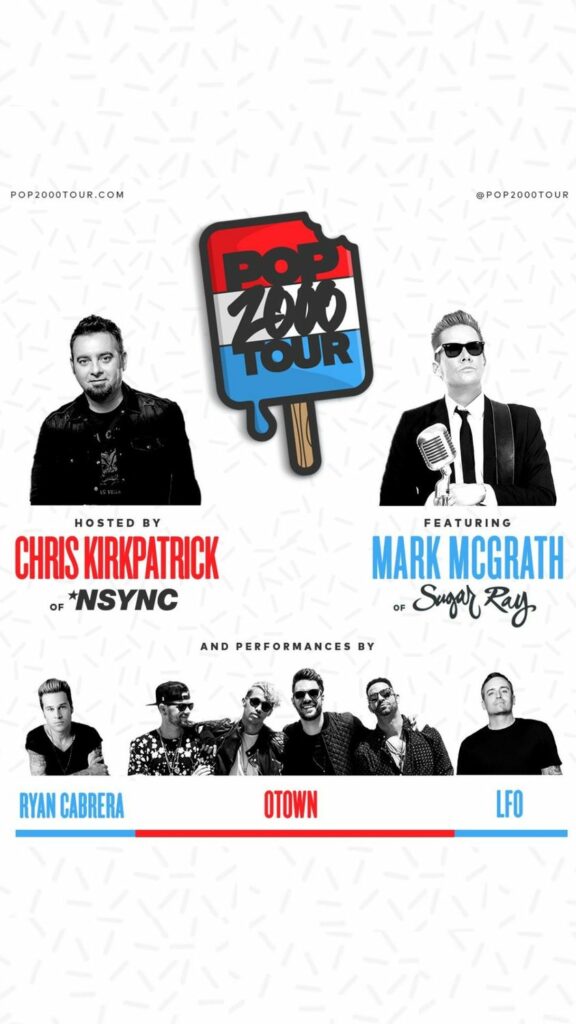 Chris Kirkpatrick is an American singer, dancer, actor, and voice actor who is best known for his work as a founding member of the pop group *NSYNC in which he sang countertenor. As a voice actor, he has worked on numerous kids shows, including voicing the character of Chip Skylark on “The Fairly Oddparents” which ran for ten seasons on Nickelodeon. Kirkpatrick also guest starred on The Simpsons along with his fellow *NSYNC bandmates in the episode “New Kids on the Blecch”.

Mark McGrath is an ever-present pop culture personality known for a string of top 10 hits and several multi-platinum albums as the lead singer and songwriter for Sugar Ray. With his first hit single “Fly” Mark McGrath set the stage with new sounds that pop rock audiences had never heard before. He went on to land hit singles “When It’s Over,” “Someday,” and another number one smash hit with “Every Morning.”

O-Town’s story began in 1999, when “Making the Band” chronicled the rise to success of O-Town throughout three seasons of the series on both ABC and MTV. The group’s first two full-length albums included #1 singles, “Liquid Dreams” and “All or Nothing” and the Top 40 hit “We Fit Together.” “All or Nothing” was nominated for Song of the Year at the Radio Music Awards in 2001.

Ryan Cabrera is the singer and songwriter behind ubiquitous smashes such as “On the Way Down,” “True” and “Shine On” as well as albums including 2004’s Take It All Away, which hit #8 on the Billboard Top 200. Ryan was also featured heavily on MTV’s “Ashlee Simpson Show” and “The Hills”.

LFO burst onto the scene in 1999 with the #1 smash hit “Summer Girls” and followed with another top-five hit in “Girl on TV” and the top-ten hit, “Every Other Time”. Today, lone surviving member Brad Fischetti keeps the name of LFO alive, performing the songs to fans, new and old.
This is an all-ages show; those under 21 must be accompanied by an adult

Chris Janson
Venue: Backyard Amphitheater
Genre: Country
Date: Saturday, May 28, 2022. Doors open at 6 p.m.
Ticket Prices: $32.50 plus applicable fees for standing room only
Artist Info: Breakout country star Chris Janson is a platinum-selling recording artist, high-octane entertainer, multi-instrumentalist, and award-winning singer/songwriter. In the five years since the release of his debut album, the three-time CMA nominee has collected prestigious accolades that place him amongst country music greats. He took home the trophy for ACM Video of the Year for his Gold-certified, inspiring hit song “Drunk Girl,” which also earned the Song of the Year title at the 2018 Music Row Awards and was named one of the “Ten Songs I Wish I’d Written” by NSAI. His chart-topping, Triple-Platinum smash “Buy Me A Boat” earned the same NSAI honor, making him one in a handful of the industry’s most elite artists to earn the title multiple times, as well as the iHeartRadio Music Awards Country Song of the Year.

Janson has 4 #1 hits including multi week chart topper “Done”, “Good Vibes”, “Fix a Drink”, “Buy Me a Boat” & award winning “Drunk Girl”. His current single, “Waitin’ On 5,” can be heard now on the airwaves. In addition to his own successes, the talented songwriter has lent his pen to industry peers including Tim McGraw (“Truck Yeah,” “How I’ll Always Be”), LOCASH (“I Love This Life”) and the legendary Hank Williams Jr. (“God Fearin’ Man,” “Those Days Are Gone”) & many more. Chris is a Grand Ole Opry member.
This is an all-ages show; those under 21 must be accompanied by an adult 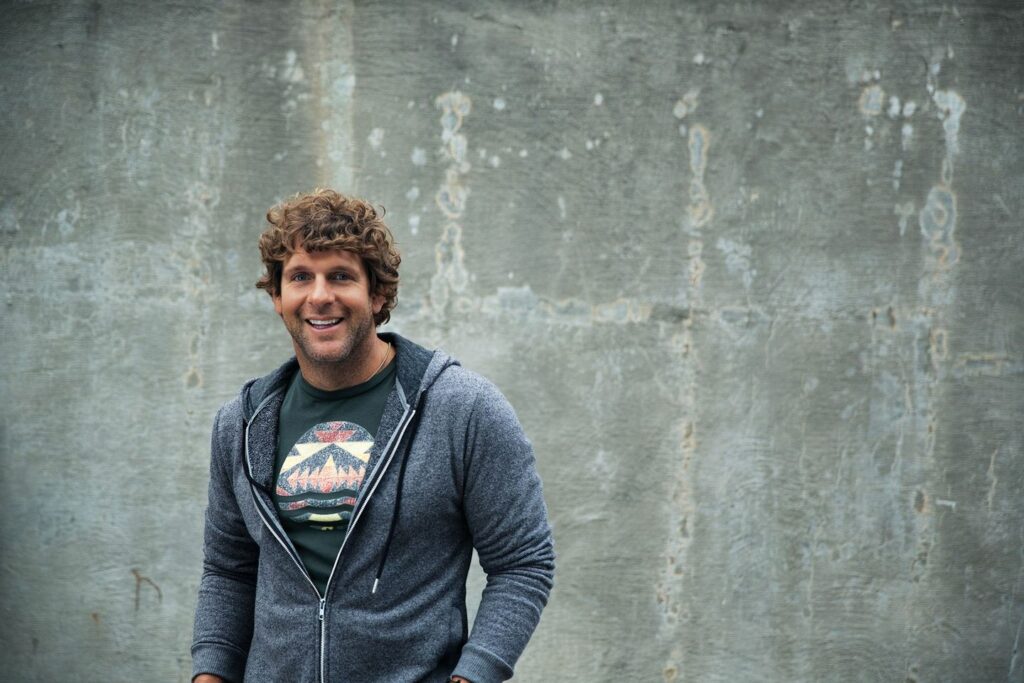 Billy Currington
Venue: Sandbar Poolside
Genre: Country
Date: Friday, May 20, 2022 at 8 p.m.
Ticket Prices: $37.50 and $57.50 plus applicable fees
Artist Info: Billy Currington’s latest album bears the breezy title Summer Forever, but the talented Georgia native has spent more than a decade in the spotlight proving he’s truly a man for all seasons. Possessing one of the smoothest and most distinct voices in any genre of music, Currington is equally skilled at delivering upbeat summertime anthems as well as exploring the complexities of life and love with a poignant ballad. On Summer Forever, Currington’s sixth studio album, he brings both with a collection of songs that will take the listener on a riveting musical journey and leave them breathless at the end of the ride.

Since his self-titled debut album bowed on Mercury Records in 2003, Currington has scored eleven career No. 1 singles, most recently, “Don’t Hurt Like It Used To.” His other hits that reached the No. 1 spot include such memorable songs as “Good Directions,” “Let Me Down Easy,” “Must Be Doin’ Somethin’ Right,” “People Are Crazy,” “That’s How Country Boys Roll,” “Hey Girl,” and “We Are Tonight.” Over the years, the self-effacing Georgia boy has amassed an impressive list of accolades. He won the “Hottest Video of the Year” honor at the fan-voted CMT Music Awards for “Must Be Doin’ Somethin’ Right” in 2006. The same year, he received an ACM nod for Top New Male Vocalist. His hit duet with Shania Twain, “Party for Two,” earned nominations from both the CMA and ACM. “People Are Crazy” took Currington’s already hot career to another level. He earned Grammy nominations for Male Country Vocal Performance and Best Country Song in addition to being nominate for Single and Song of the Year from the Country Music Association.
This is an all-ages show; those under 21 must be accompanied by an adult

Richard Cheese’s songs have been featured in the movies “Barb & Star Go To Vista Del Mar,” “Army Of The Dead,” “The LEGO Batman Movie,” “Batman v. Superman: Dawn Of Justice,” and “Dawn Of The Dead,” on HBO’s “The Leftovers,” and on ABC-TV’s “Dancing With The Stars.”  He’s appeared on Jimmy Kimmel Live, CNN with Anderson Cooper, ITV’s The Jonathan Ross Show, Jack Black’s “Festival Supreme,” England’s “Sonisphere” Festival, MTV’s Say What Karaoke, Howard Stern, Dr. Demento, and as the house band 20 times on NBC’s Last Call with Carson Daly.

Backed by Bobby Ricotta on piano, Frank Feta on drums, and Billy Bleu on bass, RC&LATM have played hundreds of sellout concerts all over the world, from Las Vegas to London, from Portland to Portugal, from Honolulu to Hollywood.  With his snappy jazz trio, his tiger-striped tuxedo, and his enormous microphone, lounge legend Richard Cheese presents the perfect mix of music, martini, and madcap.  Viva Las Queso!
Guests must be 21 years or older
SUNSET STATION 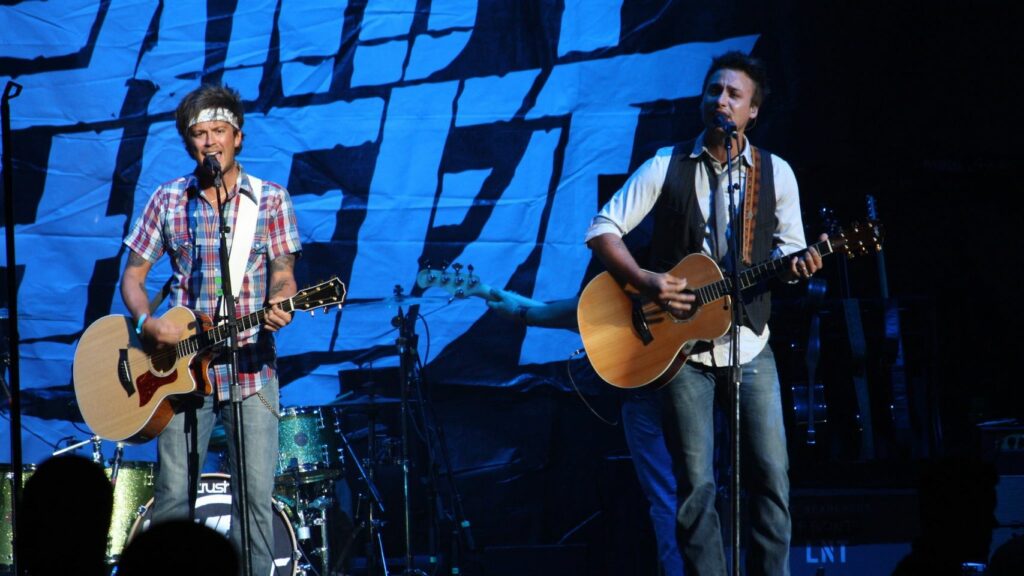 Love & Theft
Venue: Club Madrid
Genre: Country
Date: Saturday, May 14, 2022 at 8 p.m.
Ticket Prices: $27.50, $32.50 and $47.50 plus applicable fees
Artist Info:  Love And Theft — Stephen Barker Liles and Eric Gunderson — launched with the No. 1 country smash “Angel Eyes” and top 10 hit “Runaway.” The longtime friends and bandmates have gone on to garner more than 3 billion radio impressions, over 300 million plays on Pandora, and are nearing 3 million music video streams for the critically acclaimed “Whiskey On My Breath,” an epic ballad that “returns Love And Theft to the harmony-rich sound that first turned heads when they started out,” (Rolling Stone).

The ACM/CMA/CMT nominated duo has built a loyal fan base through their high-energy shows, infectious harmonies, and signature songwriting and is poised for the next chapter in their musical journey.
Guests must be 21 years or older
BOULDER STATION 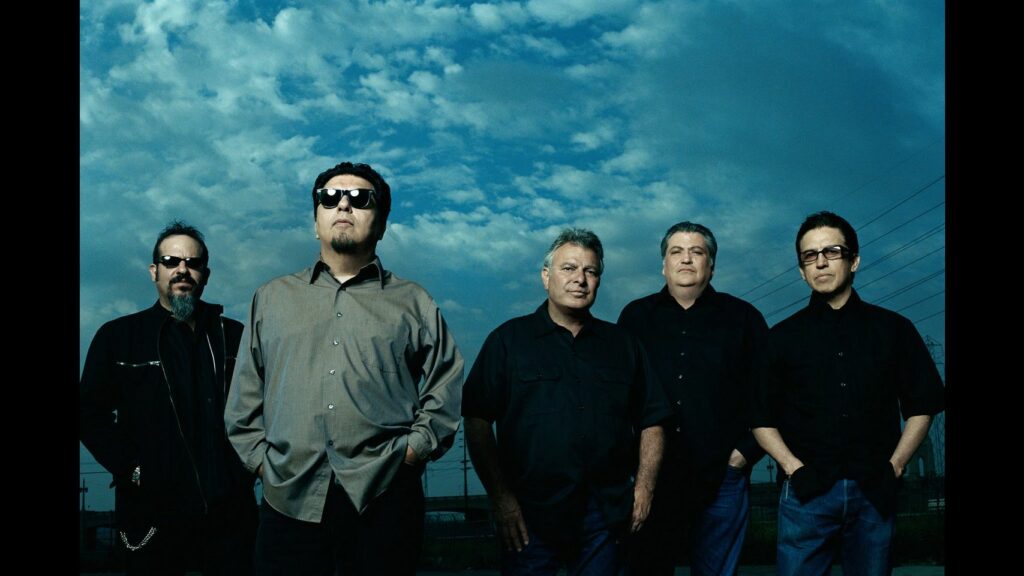 Los Lobos
Venue: The Railhead
Genre: Latin Rock
Date: Friday, May 6, 2022 at 8 p.m.
Ticket Prices: $35 plus applicable fees
Artist Info:  For all the trailblazing musical acts who’ve emerged from Los Angeles, very few embody the city’s wildly eclectic spirit more wholeheartedly than Los Lobos. Over the last five decades, the East L.A.-bred band has made an indelible mark on music history by exploring an enormous diversity of genres—rock-and-roll and R&B, surf music and soul, mariachi and música norteña, punk rock and country—and building a boldly unpredictable sound all their own.

On their new album Native Sons, the multi-Grammy Award-winners map their musical DNA by covering a kaleidoscopic selection of songs from their homeland, ultimately creating a crucial snapshot of L.A.’s musical heritage.
Guests must be 21 years or older