YUNGBLUD – THE WORLD TOUR MAKES A STOP AT BROOKLYN BOWL LAS VEGAS, MAY 4 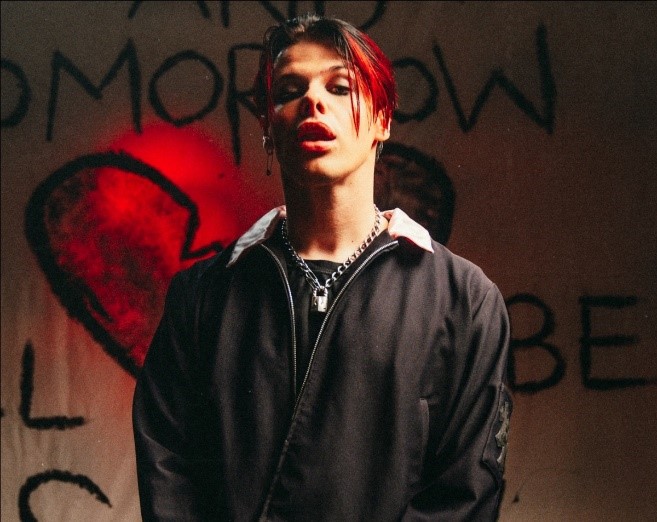 Following the release of his critically acclaimed self-titled studio album YUNGBLUD, which has now reached #1 in the United Kingdom, Ireland, Australia and New Zealand, the multiple-award winning, global superstar YUNGBLUD has today announced his 2023 YUNGBLUD – THE WORLD TOUR.

Produced by Live Nation, the 29-city North American run kicks off Friday, April 29th and will make a stop at Brooklyn Bowl Las Vegas on May 4. YUNGBLUD will be joined on the road by American band, The Regrettes. The general on sale will begin Friday, September 16th at 10am local time. For a complete list of live dates and to purchase tickets, please visit https://www.yungbludofficial.com/tour/

Last week, YUNGBLUD released his highly anticipated self-titled third studio album ‘YUNGBLUD’ [Locomotion/GEFFEN Records] to vast critical acclaim. Rolling Stone hailed it for its “angst and tender introspect,” and for being “larger than life,” and “perfect for arena singalongs.” While NPR applauded it as a cohesive body of work,” finding the young artist “coming into his own.” The 24-year-old rocker continued to celebrate its much-deserved success with a whirlwind 5-day in-store tour playing 9 cities across North America, a history making epic three-venues-in-one-night celebration, performing live at Sunset Blvd’s most iconic venues—The Roxy, Whiskey a Go-Go and The Viper Room on the legendary Sunset Strip for an exciting first of its kind live-streamed concert. And on Friday, he made a very special live appearance on ABC’s Jimmy Kimmel Live! to perform his current single ‘Tissues.’ Watch his spellbinding live performance HERE.

YUNGBLUD the album marks an exciting new era for the artist, with previously released fan-favorites ‘The Funeral’, ‘Don’t Feel Like Feeling Sad Today’ and ‘Memories ft. Willow’, which surpassed 1 million streams within its first week. The album has already received an outstanding reception, from critics across the globe and arrived alongside the official music video for his latest single, ‘Tissues.’

Speaking on the ‘Tissues’ video, which Rolling Stone called “colorful” and “dance-fueled” was shot in London and directed by Charlie Sarsfield, YUNGBLUD says: “This is a new era for YUNGBLUD, I wanted to dance, I wanted to move, and I wanted to really personify in the video what this song means. It’s happiness and it’s euphoria and it’s letting the fuck go.” The infectious new track features a sample of The Cure’s ‘Close To Me’, which was personally approved by the band’s lead singer Robert Smith.

Rarely does an artist come along such as YUNGBLUD, who has undeniably become Gen-Z’s rock n’ roll poster child. Fearlessly advocating for the weirdos, freaks and the marginalized in the world, from the ground up, YUNGBLUD has amassed legions of dedicated fans from all over the world, who flock to his sold-out shows each night and scream every word to his songs as if their lives depend on it. With co-signs from rock legends such as Mick Jagger, Ozzy Osbourne, Steve Jones, and Dave Grohl, YUNGBLUD’S trajectory is looking brighter and more exciting than ever.

YUNGBLUD is out everywhere now.

Citi is the official card of the YUNGBLUD: The World Tour. Citi cardmembers will have access to presale tickets beginning Monday, September 12th at 12pm local time until Thursday, September 15th at 10pm local time through the Citi Entertainment program. For complete presale details visit www.citientertainment.com. The general on sale will begin Friday, September 16th at 10am local time. For a complete list of live dates and to purchase tickets, please visit https://www.yungbludofficial.com/tour/