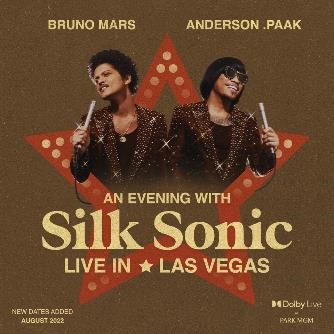 Tickets for Nine Additional Performances at Dolby Live on Sale Friday, May 13 at 10 a.m. PT

GRAMMY Award-winning duo Silk Sonic announced today it will add nine shows at Dolby Live at Park MGM in Las Vegas beginning Wednesday, Aug. 3. The full list of Silk Sonic’s performance dates is below, including the remaining dates of the current May run.

**All shows are scheduled to begin at 9 p.m.

Members of MGM Rewards, MGM Resorts International’s loyalty rewards program, will receive access to a pre-sale running Thursday, May 12 at 10 a.m. PT to Friday, May 13 at 8 a.m. PT.

About Silk Sonic:
The seeds of the collaboration were planted in 2017 when Anderson .Paak was on tour with Bruno Mars on the European leg of his 24K Magic World Tour. One late-night jam session on the road unlocked immediate chemistry. Just before the world slipped into quarantine, Bruno called Anderson: “Remember that idea we had back in 2017? Let’s do it.” One studio session grew into to a months-long collaboration, culminating the “setlist of doom.” Legendary Bootsy Collins christened Silk Sonic and came in as the “special guest host” for An Evening With Silk Sonic, their debut album.

Their infectious jingle co-written and performed for SelvaRey Rum amassed widescale praise over the summer. The duo then coasted into their sophomore release of “Skate,” which saw them glide into a second top 10 hit on Billboards Hot R&B/Hip-Hop Songs as it debuted at #4 and began as the genre’s best-selling song of the week. Billboard noted “Smokin’ Out The Window” how “Anderson .Paak and Bruno Mars take it all the way back to the 1970s Soul Train era in the retro video. [It]finds them going through their choreo on an old school TV set while rocking wide lapel tuxedo jackets.” An Evening With Silk Sonic was recently updated to include Silk Sonic’s cover of Con Funk Shun’s “Love’s Train,” which has reached #1 on Billboard’s Adult R&B Airplay and R&B Radio.

Park MGM is the Las Vegas Strip’s first smoke-free resort, offering an intimate hotel experience on a grand scale. Park MGM features 2,700 guest rooms and suites in addition to NoMad Las Vegas’ 293 well-appointed guest rooms and suites on the resort’s top four floors. The resort’s robust culinary program features NoMad Library; L.A. legend Roy Choi’s Korean BBQ concept, Best Friend; Hogsalt Hospitality’s renowned Bavette’s Steakhouse; and the 40,000-square-foot vibrant Italian marketplace, Eataly, among other dining and cocktail experiences. Dolby Live, the resort’s 5,200-seat entertainment destination, is home to special engagements by Lady Gaga, Bruno Mars, and Aerosmith, among other top artists. Park MGM also is home to On The Record, a unique nightlife concept from LA-based Houston Hospitality. Park MGM and NoMad Las Vegas are located in the heart of The Strip, next to the entertainment and dining neighborhood created by The Park and the 20,000-seat T-Mobile Arena. Park MGM and NoMad Las Vegas are operated by MGM Resorts International (NYSE: MGM). For more information and reservations, visit ParkMGM.com, call toll-free at 888-529-4828, or find us on Instagram, Facebook and Twitter.