Get up to 25% off Las Vegas hotel rooms during the Welcome Back Sale. Click Here to Book Now. Caesars Palace Las Vegas, Flamingo Las Vegas, and Harrah’s Las Vegas:

Caesars Palace, Flamingo, and Harrah’s will offer lodging, dining options and access to their outdoor pools, as well as slot machines and table games. All offerings will operate in a manner consistent with physical distancing guidelines. The Company will be suspending fees for paid self-parking in Las Vegas. Caesars expects the gaming floor at The LINQ Hotel & Casino to be the next property in Las Vegas to reopen, with timing based on customer demand.

Get up to 25% off Las Vegas hotel rooms during the Welcome Back Sale. Book Now. Reserve your stay before June 30, 2020 and get rooms as low as $35 per night through May 31, 2021. Promo Code OPEN20. Blackout dates may apply. Must be 21 years or older to book. Includes Bally’s, Caesars, Flamingo, Harrah’s, Nobu, Paris, Planet Hollywood, Rio, Linq and more!

NURSES DISCOUNT AVAILABLE AT THESE HOTELS

Las Vegas Promotional Rate rooms starting at $29/night. Click Here to Book Now.Reserve your stay before April 27,2020 and get rooms as low as $29 per night through Feb. 28, 2021. Promo Code SEMI20. Includes Bally’s, Caesars, Flamingo, Harrah’s, Nobu, Paris, Planet Hollywood, Rio, Linq and more! Blackout dates may apply. Must be 21 years or older to book. Not valid with any other offer. Offer subject to change at anytime

• Offer: California Residents save up to 30% off rooms at the Flamingo Las Vegas, Harrah’s Las Vegas, Planet Hollywood Las Vegas, Rio Las Vegas, and LINQ Hotel + Experience. Use promo code CARES.
• Promo Code: CARES
• Booking Window: 03/27/2020-05/31/2020
• Valid Lodging Dates: For future stays at Flamingo, Harrah’s, Planet Hollywood, Rio, and LINQ
• Disclaimer: Blackout dates may apply. California ID required at check-in for the discount. Must be 21 years or older to book. Offer subject to change at any time. Not valid with any other offer. 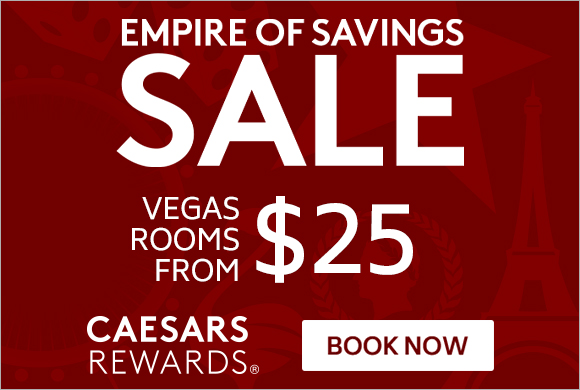 Las Vegas Empire of Savings Sale rooms starting at $25/night. Click here to Book Now. Includes Bally’s, Caesars, Flamingo, Harrah’s, Nobu, Paris, Planet Hollywood, Rio, Linq and more! eserve your stay before Feb. 17, 2020 and get rooms as low as $25 per night through Dec. 29, 2020. Promo Code EOS20. Blackout dates may apply. Must be 21 years or older to book. Not valid with any other offer. Offer subject to change at anytime.

Grab your boys and Bettys for a totally  ‘80s holiday ski party at  BEER PARK at Paris Las Vegas starting at 5 p.m. on Saturday, Dec. 8.

A tribute to the totally tubular ‘80s ski fashion, the event will set the mood to shred with a hot chocolate bar, a limited-time stout beer flight, electric tableside s’mores, shot skis, Santa Claus photo opportunities, karaoke and more. There will also be a chance to win one of 10 lift passes and rental vouchers for the 2018-2019 winter season at Lee Canyon Ski Resort.

Along with incredible views of the Fountains of Bellagio, BEER PARK hosts local DJs and also offers billiards and foosball, as well as oversized yard games, including Jenga and Connect Four. Package pricing and reservations are available by calling 702.444.4500 or by visiting www.beerpark.com. BEER PARK by Budweiser is owned and operated by BEER PARK, LLC (not by Anheuser-Busch).

About BEER PARK
BEER PARK is located at Paris Las Vegas on a 10,000-square-foot deck set in the backdrop of the world-famous Las Vegas Strip. The dynamic rooftop bar and grill offers a tailgate party atmosphere with an outdoor smoker and grill, picnic tables, and more than 100 drafts, can and bottle beer selections; including 36 beers on tap. The all-American menu includes next-level stadium-style cuisine, including selections such as barbecue ribs, oversized drumsticks and reuben sandwiches, all prepared with meats cooked on a custom-made Budweiser Beechwood Grill; as well as Shock Top-marinated bratwurst, nachos and more. With dozens of high-definition televisions throughout and an onsite betting station, BEER PARK is a popular gathering place for sports fans. BEER PARK is open daily from lunch through late night, transitioning to a fun, high-energy bar after 10 p.m. BEER PARK is owned and operated by BEER PARK. The phone number for BEER PARK is 702.444.4500, the website is www.beerpark.com, and information about private events is available via email at info@beerpark.com. BEER PARK is on Facebook at www.facebook.com/BeerParkLV and on Twitter and Instagram at @BEERPARKLV.

About Anheuser-Busch
For more than 160 years, Anheuser-Busch and its world-class brewmasters have carried on a legacy of brewing America’s most-popular beers. Starting with the finest ingredients sourced from Anheuser-Busch’s family of growers, every batch is crafted using the same exacting standards and time-honored traditions passed down through generations of proud Anheuser-Busch brewmasters and employees. Best known for its fine American-style lagers, Budweiser and Bud Light, the company’s beers lead numerous beer segments. Budweiser and Bud Light Lime Lime-A-Rita were named Brands of the Year for the Beer and the Spirits, Malt Beverages and Wine categories, respectively, by Ace Metrix® in 2014.  Anheuser-Busch is the U.S. arm of Anheuser-Busch InBev and operates 17 local breweries, 21 distributorships and 23 agricultural and packaging facilities across the United States. The company committed to investing more than $1.5 billion in its U.S. brewing, agriculture, packaging and distributing operations by 2018. Its flagship brewery remains in St. Louis, Mo., and is among the global company’s largest and most technologically-capable breweries. Visitor and special beermaster tours are available at its St. Louis and five other Anheuser-Busch breweries. For more information, visit www.anheuser-busch.com.

dick clark productions and ABC announced today that Celine Dion will perform a special rendition of Edith Piaf’s “Hymne à L’Amour” in French as tribute to those affected by the recent attacks in Paris at the “2015 American Music Awards.”

“We felt it was important to show our solidarity in light of the recent events in Paris and all around the world,” said Larry Klein, Producer of the “2015 American Music Awards.”  “Celine’s performance will help us express our feelings through song, when words do not suffice.”

About the American Music Awards
The American Music Awards, the world’s biggest fan-voted award show, features performances from today’s hottest artists and presents fan-voted awards in the categories of Pop/Rock, Alternative Rock, Country, Rap/Hip-Hop, Soul/R&B, Adult Contemporary, Contemporary Inspirational, Latin, EDM, Soundtrack, New Artist of the Year Presented by Kohl’s, Song of The Year, Collaboration of the Year Un-leashed by T-Mobile and Artist of the Year.  The American Music Awards pays tribute to today’s most influential and iconic artists.  The show is produced by dick clark productions and is seen in more than 160 countries around the world. For more information, visit www.theamas.com, www.dickclark.com or abc.go.com/shows/american-music-awards. 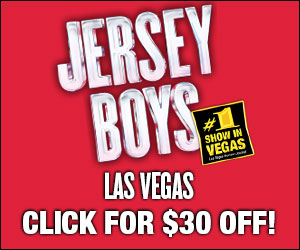 The Eiffel Tower Experience at Paris Las Vegas paid tribute to the 125th anniversary of the original Eiffel Tower in Paris, France yesterday with an incredible stunt that astounded passersby on the Las Vegas Strip. The highly-visited Las Vegas attraction kicked off festivities in heart-pumping fashion when two Red Bull BASE jumpers leaped from the top of the 541-foot tower, landing safely in the Paris Las Vegas front drive next to the replica Arc de Triomphe.

“What better way to celebrate this monumental event than with a monumental party on the Strip,” said Regional President David Hoenemeyer as he toasted to the success of the talented Red Bull team. “These guys really know how to capture attention, and that’s exactly what they did here tonight.”

While the original Eiffel Tower was constructed on March 31, 1889, the half-scale replica at Paris Las Vegas opened in 1999, and has since welcomed more than 10 million visitors. In celebration of the Parisian landmark’s historic milestone, the Eiffel Tower Experience will host a series of ongoing events throughout the year. The newest addition is “Locks on the Bridge,” Las Vegas’ take on the Parisian tradition that enables couples to declare their love by securing a personalized lock to the iconic bridge next to the Eiffel Tower Experience.

The Eiffel Tower Experience is an exact reproduction of one of Europe’s most famous landmarks, rendered meticulously at half-scale. At 460-feet, an experienced ambassador welcomes guests and points out can’t-miss Las Vegas landmarks and interesting historical facts. The tower is open daily from 9:30 a.m. to 12:30 a.m., weather permitting.

Additional Las Vegas landmarks have joined with Aid for AIDS of Nevada (AFAN) to show their support in the fight against HIV and AIDS in remembering those who have died and honoring the ones living with HIV/AIDS on World AIDS Day on Sunday, Dec. 1. Caesars Palace, Bally’s, Paris, Harrah’s, Planet Hollywood Resort & Casino and Miracle Mile Shops will all show a special message of support on their LED marquee screens throughout the day, joining City Hall, Keep Memory Alive Event Center, The Venetian and The Palazzo and MEET Las Vegas, all lighting up red.

The day’s events kick off with “Every Piggy Counts Piggy Herding” from 3-6 p.m. at The Gay and Lesbian Community Center of Southern Nevada (The Center) located on 401 S. Maryland Pkwy, followed by a special 20th anniversary screening of the Academy Award-winning movie “Philadelphia” starring Tom Hanks, as part of LGBTQ+, the collaborative effort by AFAN and The Center. Popcorn will be provided and viewers are encouraged to come early to reserve their spot and BYOB – “bring your own blanket.” Following the movie at 6:30 p.m., AFAN will start their annual candlelight memorial walk from the Judy Bayley Theatre at UNLV to the AIDS Memorial Garden located by the Rod Lee Bigelow Health Sciences building. Candles and all necessary items will be provided. There is no cost to attend either event.

The first World AIDS Day was held in 1988 and was the first-ever health awareness day to be recognized globally. Today, an estimated 34 million people live with HIV worldwide and AFAN helps approximately 3,500 adults and children in Southern Nevada through direct client service programs, food programs, prevention and education programs and community outreach.

TAKE A STAB AT YOUR BEST PUMPKIN CARVING FOR A CHANCE TO
WIN TICKETS TO LAS VEGAS’ HOTTEST SHOW, ABSINTHE
ABSINTHE’s Mistress of Ceremonies, Penny Pibbets Will Announce the Winner on Oct. 31

Are you bored and looking for something new and creative to do for the Halloween season? Then why not pick up a pumpkin and use your imagination to carve the best pumpkin creation for a chance to win tickets to the hottest show in Las Vegas, ABSINTHE at Caesars Palace. ABSINTHE’s incompetent assistant to The Gazillionaire, Penny Pibbets has announced the Halloween Pumpkin Carving Contest for all fans to enter.

The winner of the Halloween Pumpkin Carving Contest will receive a pair of tickets to ABSINTHE, paid by Penny herself. However, since Penny is forking over the cash, prizes are subject to change without notice since it depends on the allowance given to her by The Gazillionaire.

Pumpkin artists will have free reign on style and creativity, but make sure it ties in with ABSINTHE! So maybe it’s a carving of Penny on a unicorn, or ABSINTHE’s Green Fairy, Melody Sweets doing a striptease, or a carving of The Gazillionaire, but the more unique and craftier the better! Don’t forget to post a picture of your creation on Facebook and Twitter, and make sure to tag ABSINTHE and Penny Pibbets to enter your submission.

All entries must be received by Monday, Oct. 28 at 11:59 p.m. Penny will select and announce the final winner on Facebook and Twitter on Halloween, Oct. 31.

For an example, check out the photo below, which was submitted by ABSINTHE fan, Adam Jackson. Thanks, Adam!

Guests who don’t end up winning can still check out Vegas’ best show on the Strip! ABSINTHE is offering a special ticket offer to receive $20 off reserved seating by using the code: ABS20.

ABSINTHE show times are Wednesday-Sunday at 8:00 p.m. and 10 p.m., with no show on Monday and Tuesday. The schedule is subject to change without notice.

Tickets can be purchased online at www.Ticketmaster.com or by calling (800) 745-3000. Tickets can be purchased in person at the ABSINTHE, Planet Hollywood, Bally’s, Paris and Rio box offices. For groups of 10 or more, please call (866) 633-0195 or (702) 853-5950. For additional information on ABSINTHE, visit www.AbsintheVegas.com. Follow ABSINTHE on Facebook and Twitter @AbsintheVegas.