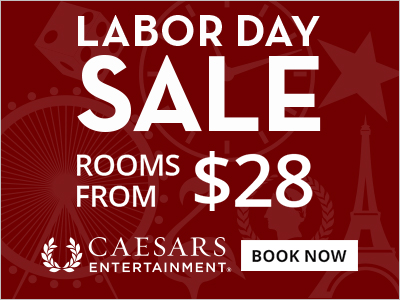 Click Here to Get up to 40% off Las Vegas hotel rooms during the Labor Day Sale. Book Now.Includes including stays at Caesars Palace Las Vegas, The Cromwell, Planet Hollywood Resort & Casino, LINQ, Bally’s, Flamingo and more!

Reserve your stay before Sept 4, 2019 and get rooms as low as $28 per night through June 30, 2020. Promo Code SEMI19. Blackout dates may apply. Must be 21 years or older to book. Not valid with any other offer. Offer subject to change at anytime.

Up to $75 Pool Credit & the Best Rates at Caesars properties!

Things are heating up at the best pools in Las Vegas! Book your stay now for best rates PLUS get up to a $75! Including the Cromwell, Planet Hollywood, Caesar Palace and many more.

Be sure to promote the Promotional Code: EPOOL.

Terms: Must book by April 30, 2019, for travel by September 30, 2019. Two-nights minimum stay required. Blackout dates apply. Credit varies by property. Credit is per room per reservation. Guest is responsible for any spend beyond credit amount. Gratuity not included. Any unused credit will not be refunded and has no cash value. Subject to availability. Rates may vary.

Pierce Brosnan is known for his big screen acting, but your viewers may be less familiar with his talent as a painter.

Brosnan’s love of painting is shared by Mariam Paré (Par-A), a disabled artist from Naperville, Illinois, and a member of the Mouth & Foot Painting Artists, who recently visited the international movie star’s Malibu, California home to present him with two of her paintings, one depicting Brosnan in his iconic James Bond role and another as his affable self.

Brosnan offered Paré a look at his own works and the two discussed their mutual passion for painting and how it has helped them cope with tragedy in their lives.

The Mouth and Foot Painting Artists is a unique association of hundreds of disabled artists worldwide, who make their living by selling reproductions of their original paintings in the form of greeting cards, calendars and other items.

You can support these talented disabled artists by visiting www.mfpausa.com

This will be the Runnin’ Rebels’ first game in a week as it lost to Arizona State, 86-80, last Tuesday. Prior to the loss vs. the Sun Devils, UNLV defeated Omaha, 73-70, on Nov. 15. Runnin’ Rebel junior forward Roscoe Smith, who leads the nation in rebounding average with 16.3 rpg, has recorded back-to-back games with at least 21 rebounds, while junior forward Khem Birch, who is second in the country in blocked shots with 5.5 per contest, has had a career-high eight blocks in each of the last two games.

Tuesday’s game will be televised on CBS Sports Network with Andrew Catalon, Steve Lappas and Doug Gottlieb calling the action. Jon Sandler and Robert Smith will handle the radio call, which may be heard live on ESPN Radio 1100 AM/98.9 FM. A listen link as well as Gametracker will be available at UNLVRebels.com.

UNLV MEN’S GOLF IN FLORIDA TO CLOSE OUT FALL SEASON

The UNLV men’s golf team will close out its fall season at the Isleworth Collegiate Invitational, which is being held at Isleworth Golf and Country Club (par 72, 7,387 yards) in Windermere, Fla., Sunday-Tuesday, Oct. 20-22.

California (+4) won by two strokes over New Mexico at last year’s Isleworth Collegiate Invitational, while Cal’s Michael Kim (-4) earned medalist honors by one shot. This will be UNLV’s first appearance in this tournament since 2005.

This will be the fourth and final tournament of the fall for the Rebels. They won the title at the Carmel Cup and finished fourth at the William H. Tucker in September, before finishing ninth at the Jerry Pate National Intercollegiate earlier this month.

Live scoring of the Isleworth Collegiate Invitational will be available courtesy of Golfstat.com through a link at UNLVRebels.com or by clicking here.

Highlights include home games against Illinois, Arizona State, playing in the Las Vegas Classic at Orleans Arena and a road game at Arizona

UNLV Athletics has announced opponents and dates for the non-conference portion of its 2013-14 men’s basketball season schedule.

The schedule is highlighted by home games against Illinois and Arizona State, playing in the Continental Tire Las Vegas Classic at Orleans Arena and a road game at Arizona.

“We have again put together a schedule that will challenge our team and prepare us for an extremely competitive conference,” said head coach Dave Rice.

UNLV will play two exhibition games to start the year – both NCAA Division II Tournament qualifiers last season – Dixie State on Friday, Nov. 1, and Adams State on Tuesday, Nov. 5, both at the Thomas & Mack Center. The Runnin’ Rebels’ regular season will begin on Friday, Nov. 8 against Portland State, which will begin a season-opening six-game regular-season homestand.

UNLV will then host UC Santa Barbara on Tuesday, Nov. 12, and Nebraska-Omaha on Sat., Nov. 16, before welcoming Pac-12 Conference member Arizona State on Tuesday, Nov. 19. The Sun Devils, who last played UNLV in the 2005 NIT at the Thomas & Mack Center, were 22-13 overall and 9-9 in conference play last year advancing to the second round of the NIT.

A week later, on Tuesday, Nov. 26, Illinois will visit the Thomas & Mack Center. The Fighting Illini were 23-13 overall last year and advanced to the NCAA Tournament’s third round. The Runnin’ Rebels will close out their season-opening homestand on Saturday, Nov. 30 against Tennessee-Martin.

UNLV will play its first road game on Saturday, Dec. 7 at Arizona. The Wildcats went 27-8 overall and tied for second in the Pac-12 last season with a 12-6 league mark before advancing to the NCAA Tournament’s Sweet 16. UNLV holds an 11-6 all-time record against Arizona. The last meeting between the two schools was in 2009, which concluded a four-year series.

UNLV will play a second-straight road game on Saturday, Dec. 14 at Southern Utah before starting play in the Las Vegas Classic at the Thomas & Mack Center. Those preliminary round games will be against Sacred Heart on Wed., Dec. 18, and Radford on Friday, Dec. 20.

Las Vegas Classic play then shifts down the street to the Orleans Arena on Sunday, Dec. 22 and Monday, Dec. 23. UNLV’s opponent for Dec. 22 is Santa Clara from the West Coast Conference and then on Dec. 23 it will face either Mississippi State from the Southeastern Conference or South Florida, formerly of the Big East Conference (now named American Athletic Conference). Santa Clara was 26-12 overall last season and won the College Basketball Invitational title.

The Runnin’ Rebels will close out their non-conference schedule at home against Cal State Fullerton on Saturday, Dec. 28.

All game times and television appearances, along with UNLV’s Mountain West schedule will be announced at a later date.

The Runnin’ Rebels played in their fourth straight NCAA Tournament this past season and their sixth in the last seven years. Only 12 programs nationally have matched that and it is tops in the Mountain West over that span.

UNLV, which won four games over ranked teams last year and ranked in the top-10 nationally in assists, rebounding and blocks, returns two starters and six players overall from that team. Three additional players redshirted last year and five newcomers will be welcomed for 2013-14.